Now that we have SingularityCE installed in WSL2, and NVIDIA GPU support is enabled, we will create a  Singularity Container Services account and configure the local Singularity client, followed by building a remote container.

This demonstration will include several steps such as:

An account may be created by using SSO linked to a Google, GitHub, GitLab, or Microsoft ID. To get started browse to https://cloud.sylabs.io 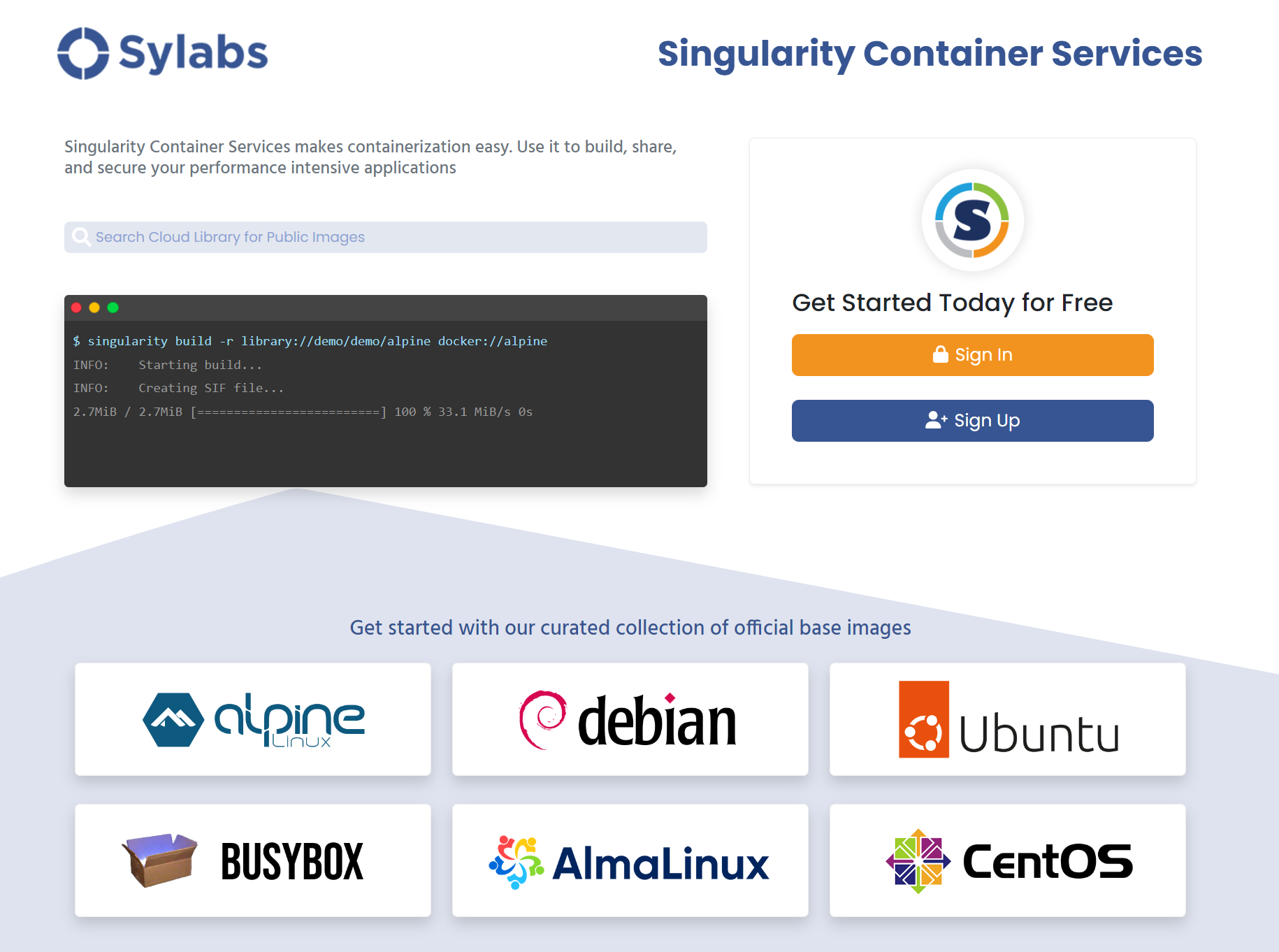 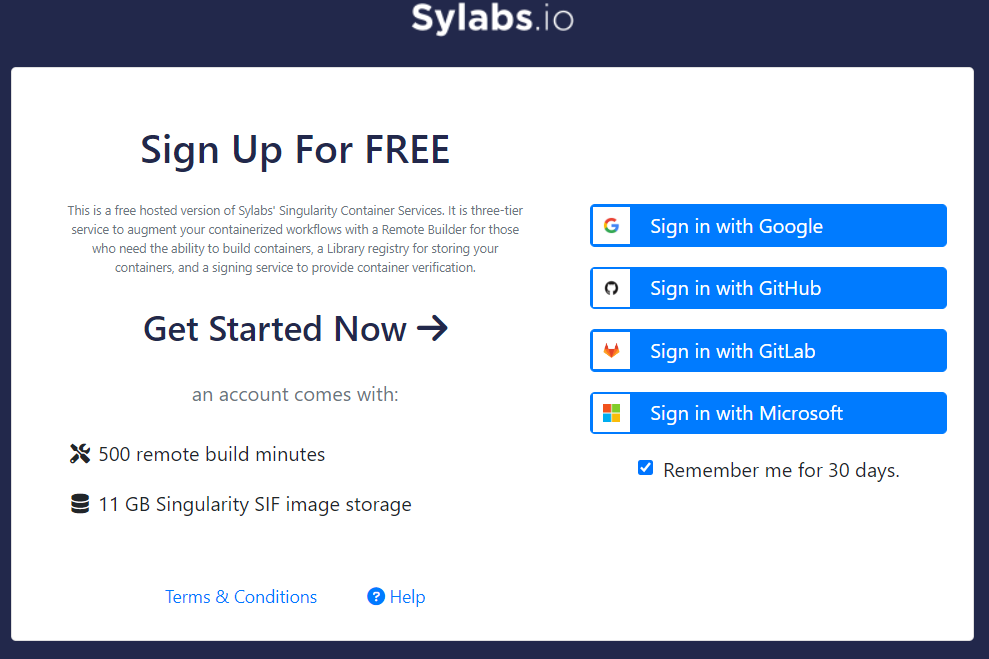 You’ll then be asked to choose a Sylabs username. Using all lowercase letters, the username will identify you in the container library, and other Singularity Container Services. In this scenario we are choosing “sylabsdemo”. 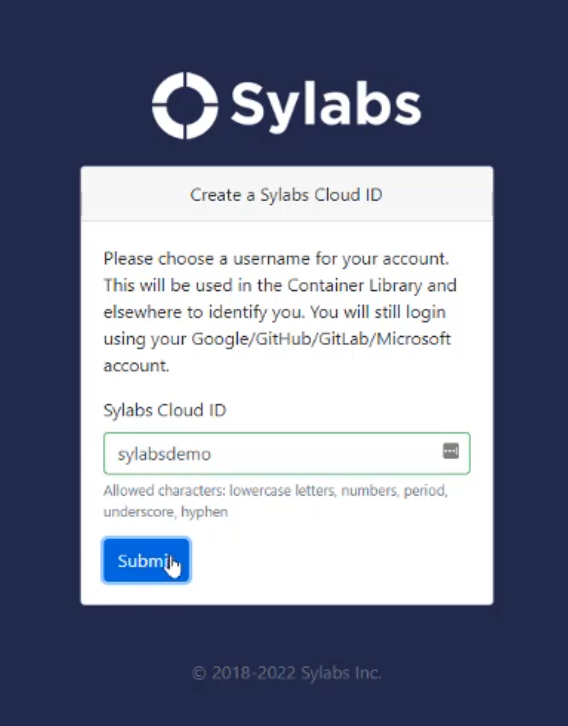 Describe the screen layout starting from the Left side My Projects

On the right side of the screen is a list of curated OS SIF containers that are available to all SCS registrations. These images are accessible to pull via the Singularity command line. But more of that in a later section of this demonstration. 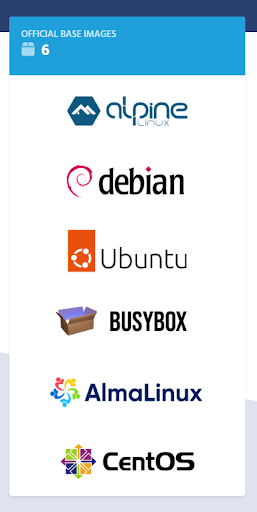 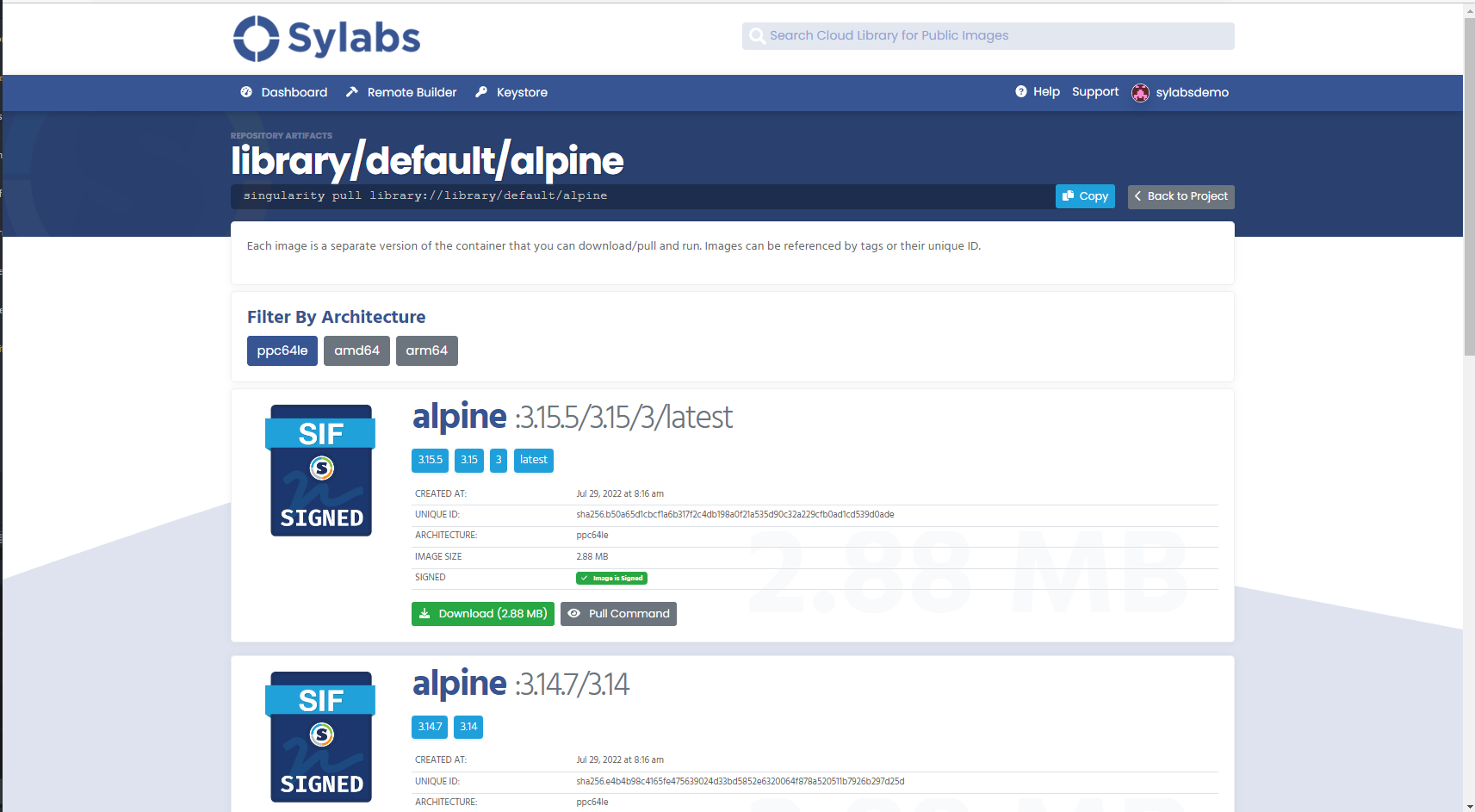 Selecting Alpine brings us to the repository artifacts, that include the latest signed version of 3.15 for power, Intel and ARM architectures. Scrolling through displays older versions that have not been signed. Scroll back to the top and select Dashboard for the next steps.

Connecting the Singularity CLI client to SCS. Back at the Dashboard, click the Access Tokens button, then enter a name in “create new access token” and click the green “+” button. In this scenario, it is called “sdkey2”.

You’ll be presented with the token in a copy-paste text box to enter into your password manager, or download as a ‘sylabs-token’ file. Choose the methodology that works best for your workflow.

You’ll be presented with the token in a copy-paste text box to enter into your password manager, or download as a ‘sylabs-token’ file. Choose the methodology that works best for your workflow. Important: Tokens are the keys to the Singularity Container Services, and they may be revoked prior to the automatic 30-day expiration period. Before leaving this screen, you may want to user your favorite password manager, or copy the displayed access token into your clipboard. Once you move away from this screen, you will not longer be able to view the token, that is why you would securely store the “sylabs-token” file.

You will notice that the Singularity client is “(logged out)” of the remote services.
Lets display the default Singularity Container Services endpoint. This indicates the Singularity Client is configured to use the Remote Build, Library and Keystore at cloud.sylabs.io

Now we will login to those remote services. We’ll take the content of the “sylabs-token” Access Token file that was previously created,  and paste it in the singularity remote list command  “Access Token” prompt. The contents of the paste are hidden. Pressing enter, the singularity remote login command should verify the token is correct, followed by “INFO: Acces Token Verified!” message.

With verification of the access token, the next step is to check the status of the services.

Verification of the authentication token and the message “(logged in)” indicates success.

You can interact with the remote build services either through the SCS Recipe Editor, Singularity CLI, or by the open source Singularity Remote Build Client.

The SCS Remote Build function provides a valuable feature to anyone who:

The remote build function of SCS is secure. Each build request creates a new compute environment specifically for your build, it then builds the container, securely returning it to the SCS Library or to your workstation, then tears down that session’s environment.

Today we are demonstrating how to build a container from the definition editor within SCS, using a DockerHub source container and directly storing it in the SCS Library. This container will be 2.56GB, but you may find yourself building much smaller containers more suitable to your needs.

We mentioned earlier SCS has a feature to build a SIF container directly from the WebGUI without the need of using the Singularity CLI.

Lets go to the Dashboard and then into Remote Builder 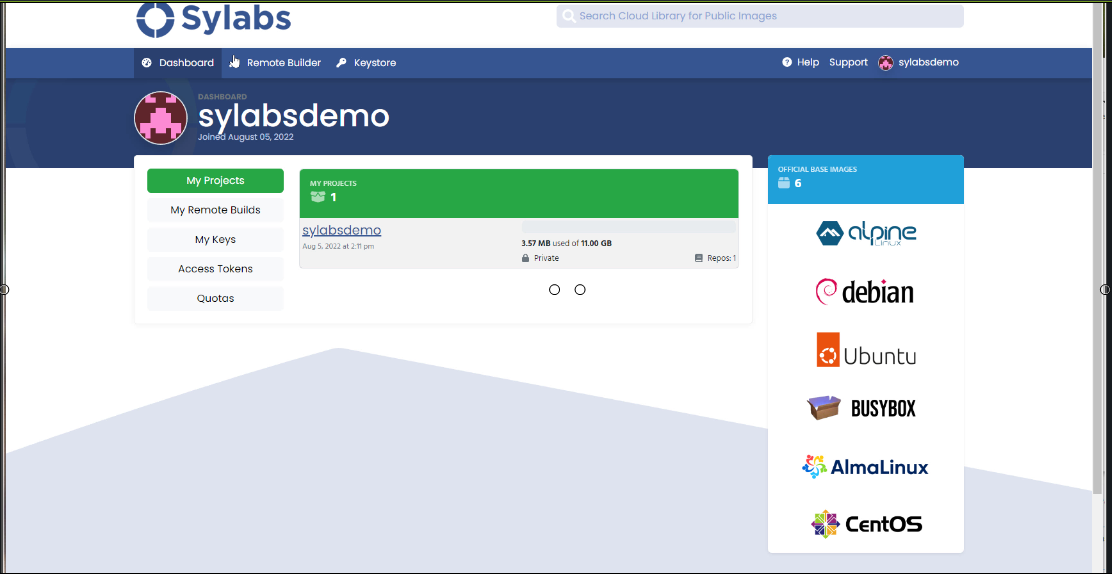 You’ll see below a previously created a container, and the account has used 57 minutes of build-minute allocation. 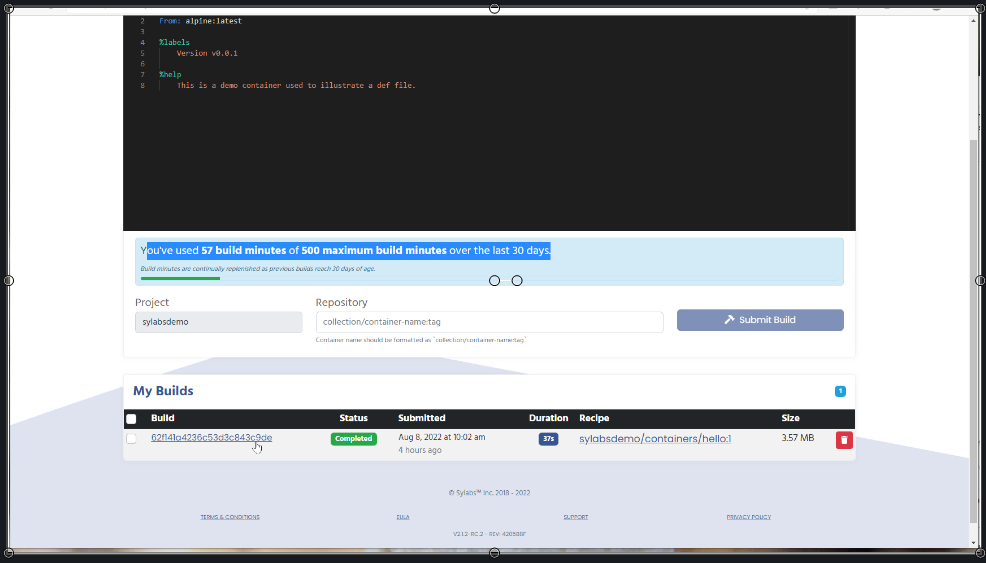 Through that Build Identifier and Recipe links we have the option to view the container build logs,

Through that Build Identifier and Recipe links we have the option to view the container build logs, 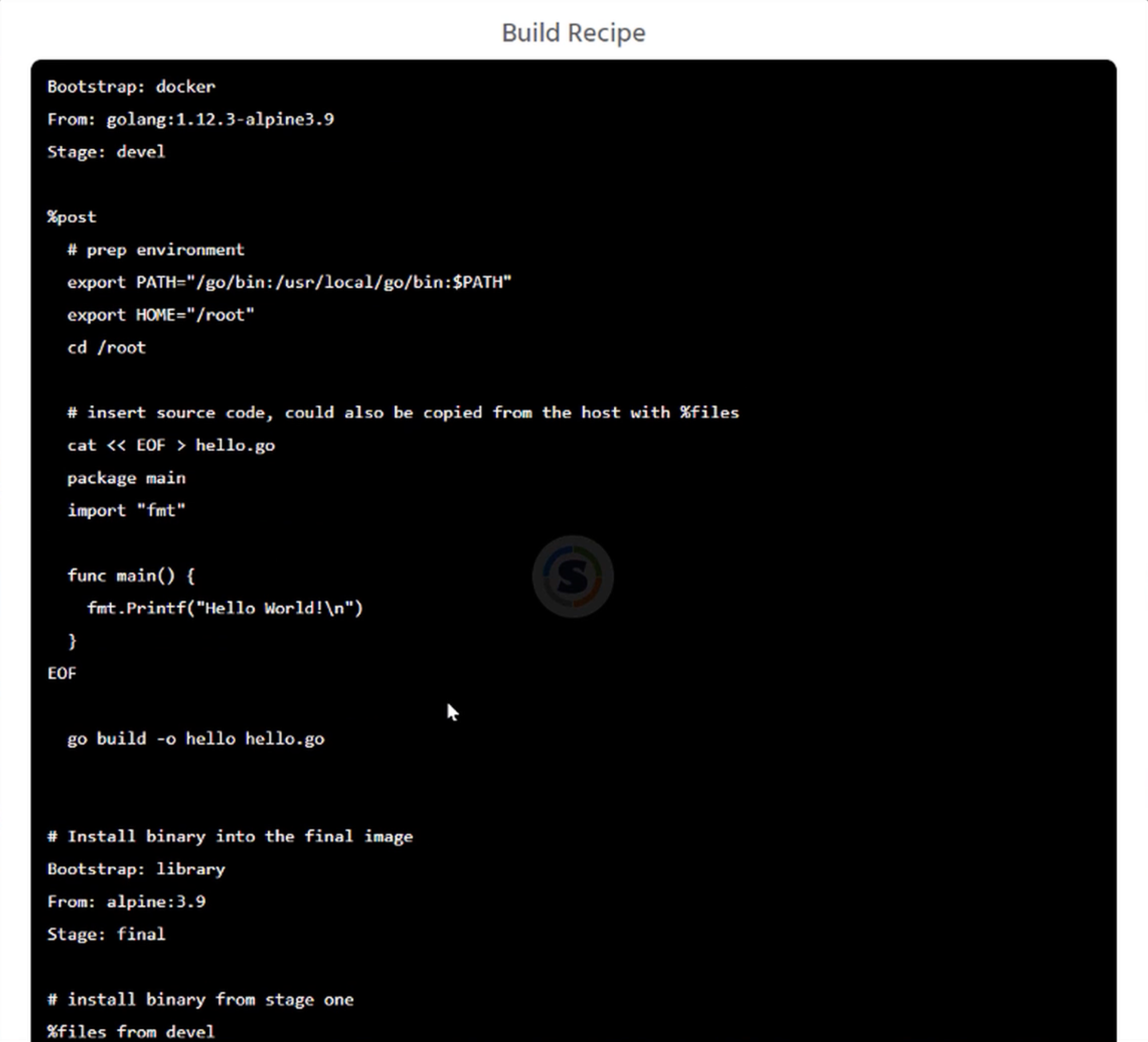 And the associated Build Recipe file.

There is also an option to delete the container.

Now we will scroll back up to the sample definition file listed in the Definition file editor, and quickly build that container. The “Bootstrap” section denotes the latest Alpine container from DockerHub. The “From” section points us to the container name and the version “latest”

All you need to do here is put a name in the “Repository”, following the format described in the text box

We’ll put this in our “container” collection, followed by a container name of “myalpine” and tag named “test”

From here, the recipe file can be viewed, as well as the container image and the overall build time.

Let’s take a look at the container we just built. The container is identified as an AMD64 architecture, with the “test” tag, the creation date, unique identifier and the image size. We can also see the image is yet to be signed which we will get to later.

Ok, now that we created a quick container, let’s create the TensorFlow container needed to run the sample workload. We’ll repeat a similar process to the alpine container.

We have a definition file already created and will paste the content into the recipe editor. Taking the source container from Docker, adding in some %label and %help information describing the container. We’ll put it in the container repository and name it accordingly. This is a sizable container (2.56GB) and will take a little more time to build, which we’ll fast forward.

The container is now completed and we’ll take a look at the details. As with all containers, this one can be downloaded from the Web interface, we can see the sample pull commands and the commands needed to sign the container. Because we can scroll back through the logged output of the build we will see

Next week we will cover signing the container we just made and more!  Thank you for joining us…

Twitter

Linkedin

Reddit
← Open Source Collaboration - Bringing Singularity & SIF to the OCI Ecosystem Sylabs and Anchore Collaborate to Bring SBOM Support for Singularity Containers →

END_OF_DOCUMENT_TOKEN_TO_BE_REPLACED

How to Install SingularityCE from the EPEL Repository

EPEL (Extra Packages for Enterprise Linux) is a community project from Fedora, providing high-quality add-on packages for Red Hat Enterprise Linux (RHEL) and its compatible derivatives, such as AlmaLinux, Oracle Linux, Rocky Linux, and others. EPEL repository is a...